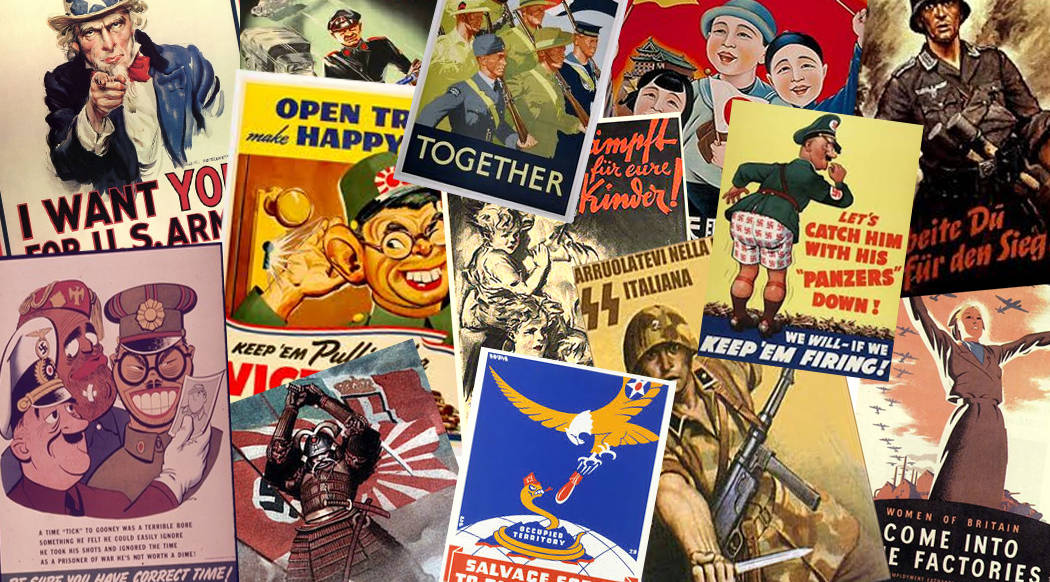 world War II propaganda posters were essentially used as advertisement to inspire, persuade and educate the people of their country during the war. Equipped with suggestive and educational values, these posters were advertisement gold. Whether it be to formulate hatred, maintain morale or urge production, many posters were shocking, catchy and just downright weird. Here are a few outrageous ones from around the world:

‘When You Ride Alone, You Ride With Hitler.’

What I think it means: Is Hitler going to break into my car on my drive to work?

What it actually means: If you do not conserve gasoline for the war effort, your loss will be the enemy’s gain.

Themes: Conservation. Anti-German. Urging citizens to conserve was a HUGE theme for propaganda posters worldwide. Gasoline was particularly important as it was necessary to fuel military tanks and aircraft.

What I think it means: Sexist men assuming the woman is an idiot.

What it actually means: Shut up about military affairs in public. Military men from all branches of the Armed Forces are gathered around a blonde woman as they exchange military secrets. Instead of assuming this lady is not so bright, she should be treated as an informant. A beauty with brains? UNIMAGINABLE.

Themes: Careless talk (with a touch of sex appeal). The idiom ‘Loose Lips Sink Ships’ originated from propaganda posters during WWII, urging people to be careful of what they say and who they say it in front of as the enemy could be anywhere.

‘Here Are The ‘Liberators.’

What I think it means: The Statue of Liberty is going to come alive and destroy your cities Godzilla-style.

What it actually means: Portrays the United States as an angel of death and Italian cities burning after a bombing. The poster was issued by the Italian Social Republic, a now defunct puppet state of Nazi Germany led by Mussolini. The poster is showing the enemy’s potential, hoping to inspire patriotism and a solid defense against the United States.

‘My Son! You See What They Have Done to Me. Destroy Fascists in The Sacred Fight!’

What I think it means: Appealing to all the soldiers who have mommy issues.

What it actually means: Mother Russia is urging the soldiers to fight for her, her people, her lands etc. No one lost more people in World War II than the Soviet Union, with estimated casualties between 22-30 million.

What I think it means: Japan has a craving for calamari?

What it actually means: Symbolically cutting the West’s hold on Asia and the Pacific islands, a Japanese soldier cuts off the tentacles of Roosevelt and Churchill.