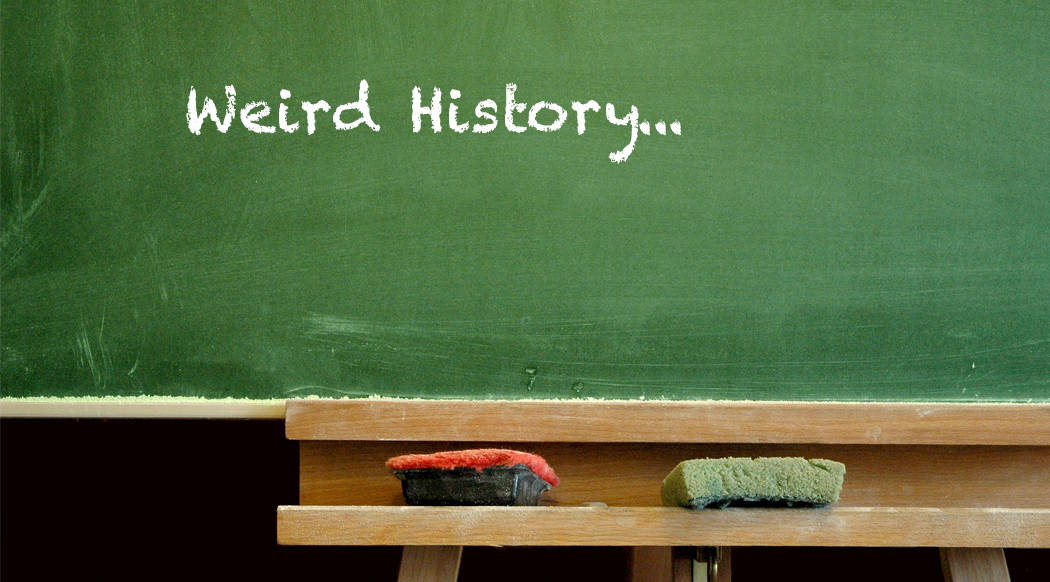 Here at the Hive, we are obsessed with absurd and downright weird facts of the historical variety. Recently, we regaled you with the tale of the the American town who hung an elephant. We also shared the curious, creepy urban myth of ‘Spring-Heeled Jack’.

Our commitment to blow your minds with weird historical facts is unshakeable, and here are ten quick-fire tales to twist your brain.

Imagine having a close family member watch you consummate your marriage? Awkward. Well, for William of Orange, that was precisely the case. Although it was the ‘done thing’ back in the day to have witnesses at the consummation of royal marriages, Williams uncle, Charles II, went one step further and actually shouted encouragement to his nephew. How mortifying!

2. Hell Hath No Fury Like A Woman Pressured to Marry

When Princess Olga’s husband, Igor, was murdered by the Drevlyans (an Eastern Slavic tribe), she took over the rule of Kiev and the surrounding provinces. The Drevlyans didn’t quite fancy having a female ruler, so they sent Olga a bunch of suitors to win her had. She had slightly different ideas.

The suitors were carried by boat to the courtyard of her castle, and then dumped into a giant hole where they were buried alive. That’s one way to say ‘nope, not marrying you’, thats for sure! Olga still felt like she had to keep up appearances with the Drevlyans, so she organised a little tete-a-tete. Once all her Drevlyan guests had arrived, the doors to the venue were barred, and the building burnt to a crisp.

But, Olga didn’t want to appear crass. She held a memorial for the victims of the fire. But lo and behold, once the Drevlyan guests had arrived, Olga ordered her royal guard to kill all 5,000 of them.

The Drevlyans had started to see the error of their ways, and asked Olga for forgiveness. Being a compassionate woman, Olga asked the Drevlyans to send her three pigeons and three sparrows from each home in their capital city, as a peace offering. Once the birds arrived, Olga had hot coals tied to their legs and sent the birds back home. Safe to say, the city burnt to the ground and any survivors were enslaved or murdered by Olga’s army.

And after all that murder…Olga is still recognised as a Saint of the Eastern Orthodox Church.

During World War II, the Russian army trained dogs to run under German tanks, and blow them up with bombs strapped to their backs.

In Egyptian mythology, it is said that the universe was created by the ejaculation of the God, Atum (and since the universe is so big, it seems that he must have sprayed it around a bit!). To recreate this moment of creation, stories go that some Pharaohs would ceremonially ejaculate into the Nile. Nice.

They say that prostitution is the oldest profession in the world. And during the American Civil War, prostitution was almost as big as the fighting. The conveniently named ‘General Hooker’ ensured that his troops were always satisfied wherever they would go, by towing along a sizeable group of ladies. With such a reputation General Hooker left a long legacy, in that his name is now used as slang for ‘prostitute’.

Believe it or not, in 1861, the Union Army Medical Department reported that 1 out of 12 soldiers had a venereal disease. One report showed that out of 468,000 men checked, 188,000 had a sexually transmitted disease.

Al Capone, from a young age, had issues with pus spilling out of his penis. Whilst this makes for disgusting reading, it is a little known fact that Capone actually had syphillis. Despite syphillis being treatable at the time, Capone refused medical attention on the grounds that he was afraid of needles.

After serving 11 year confined within the walls of Alcatraz, the disease had eaten away at his brain so much that he could no longer resume his life of crime.

This is one case of an STD being good for the police force.

Foot tickling was a tradition in the Muscovite palaces and courts for centuries. And why exactly? Well, for sexual arousal of course! Catherine the Great and  Anna Ivanovna were fervent participants.

Just like the iconic image of slaves feeding their masters grapes, women were employed as full-time feet ticklers! And…they were paid pretty well for their services. Apparently, Anna Leopoldovna had six ticklers at her feet!

8. This Isn’t A Magic Trick

We all wonder how magicians do that trick, you know, the one where they saw their assistant in half. Well, in the middle ages, torturers performed this trick in the literal sense. The offending person was hung by his ankles and sawn from his genitals towards his head.

As the poor bloke was upside down, the blood would rush to his head, meaning the saw would tear apart his body to the mid-chest before he passed out.

Hera, the Greek Goddess of Marriage, created the ‘Milky Way’ quite ingeniously, apparently. She sprayed her breast milk into the sky. Like the Egyptians, the Greeks had great imaginations!

What better way to scare your opponent in battle, than placing a row of hardened criminals at the front of your battle lines? Well, King Goujian of Yue did just this, and one step further.

He ordered these hardened criminals to cut off their OWN heads before battle commenced. Why? Well, to scare his opponents to death of course, and show them just how whack-job crazy his army were!