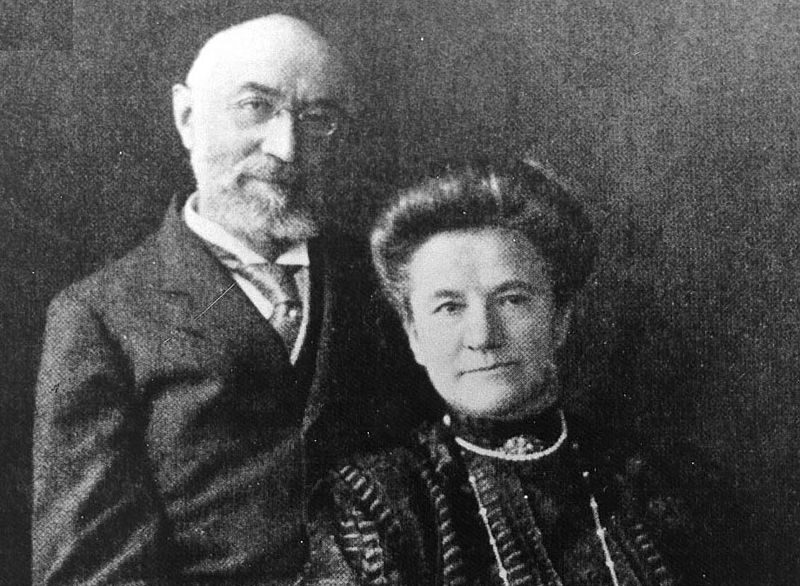 There’s a moment in the film Titanic in which we are treated, if that’s the right word (which it isn’t), to an aerial shot of an old couple spooning, if that’s the right word (which it isn’t). The couple are on a double bed. Seawater is rushing underneath them. The aerial shot is part of a montage during which the Titanic’s band are playing their final tune, Nearer My God To Thee. It’s one of the film’s more touching moments, chiefly because there’s no room for any of James Cameron’s dialogue, such as this:

‘Rose, you’re no picnic, all right? You’re a spoiled little brat, even. But, under that, you’re the most amazingly, astounding, wonderful girl, woman that I’ve ever known!’

(Under that! Under what?)

Ghastly dialogue aside, the film tried its hardest to be faithful to the true Titanic story. Throughout there are numerous references to real anecdotes, as told by the survivors. However, the spooning scene is not based on fact. In real life, the old couple involved actually chose a far more puzzling way to die.

Their names were Isidor and Ida Straus. Isidor was a co-owner of Macy’s department store in New York and one of the wealthiest men on-board the Titanic. The couple’s suite was the most luxurious on the ship. James Cameron used it as a model for the rooms of Kate Winslet’s character, Rose, recreating them to exact specifications. (The next time you watch the film, be sure to spend the entire nude portrait scene studying the decor.)

The couple’s wealth and age virtually assured them of a place in a lifeboat. However, Isidor did not feel he should take up the place of another passenger.

‘I will not go before the other men,’ he declared.

It was common knowledge that the ship held lifeboats for fewer than half of the passengers (this was originally considered a trifling matter on an unsinkable ship – which, of course, it would be). It seemed, then, that Isidor intended to die. As people desperately tried to get Ida into a boat, she also refused. She told her husband, and all within earshot,

‘We have been living together for many years.

And that was that.

It was impossible to argue with them. Their bond was unbreakable. Whenever they spent time apart they would write to one another every day. They celebrated their birthdays on the same day, even though there were months between their birth-dates. They were like loved-up sixth-formers, only with more hair in their ears. They caused on-looking romantics to hear golden harps being plucked by angels. Whilst less romantic souls searched for the nearest hole in which to vomit.

I’d like to think that the following conversation once took place during their courting process: ‘Ida, you’re no picnic, all right? You’re a spoiled little brat, even. But under that, you’re the most amazingly, astounding, wonderful girl, woman that I’ve ever known!’

‘Under that? Under what, Isidor, you saucebox!’

After making it clear that they intended to stay on-board the Titanic for as long as possible, Isidor and Ida did something breathtaking.

They did not, as depicted in the film, go back to their room and lay on the bed. They did not even try and find a part of the ship they found more comforting (like the millionaire Benjamin Guggenheim, who famously ‘dressed in his best’ and dashed to the nearest bar). Instead, they stayed outside and sat on deck-chairs.

Whether or not they stayed on the deck-chairs until the bitter end is unknown. But it is where they were last seen.

It has recently been suggested that the angle that the Titanic protruded out of the water reached no higher than 23 degrees before sliding under. If this is true, then it is not a scientific impossibility that the couple could have stayed in the chairs for all of the sinking. If the chilling 90-degree Hollywood version of the sinking is true, however, then one must imagine their stubbornness to leave the ship would have been tested sorely. Primarily by gravity. Either way, it is quite some manner in which to shuffle off this mortal coil.

As Isidor and Ida were among the elite passengers on-board, they acquired quasi-celebrity status by default. Although they never courted fame. In a world before radio, television and popular cinema, newspapers filled their columns with stories of millionaires. The life of the movie character Rose, were she real, might have been as well known to the public of 1912 as Kate Winslet is to us today.

The actions of the majority of First Class passengers during the sinking of the Titanic (who had a survival rate of 62% compared to a Third Class survival rate of 25%) possibly played some part in the shift away from a public interest in the elite.

As the weeks rolled by after the event, sickening accounts of bad taste surfaced. It was reported that Lady Cosmo Duff Gordon, upon seeing the ship finally go under, leant across to her secretary and said, ‘There is your beautiful nightdress gone.’ She had said it from the safety of a lifeboat built for 40. With 12 people inside.

J. Bruce Ismay, President of the White Star Line, who would have been expected to stay on the ship until the very end, infamously jumped into one of the lifeboats he was helping to load. (It is a scene managed brilliantly in Cameron’s film.) Ismay’s reasoning was that there was nobody else around to take up the spare place. This was true. However, his own deep sense of guilt and the (eventual) wrath of the press towards him, led to him leaving his role as White Star Line President and becoming a recluse. It is said that he turned his face away as the stern of his ship descended.

The floating body of Isidor Straus was recovered by the boat Mackay-Bennett. Among the things they found on him were a gold watch, a gold pencil-case, a platinum and pearl chain and a silver flask. He and Ida had collected valuables from their room before going on deck. Maybe they had believed that there would be some eventual way out of their terrifying situation. Their decision to casually sit in deck-chairs could also support this. Maybe, like others on board, they thought the Titanic might at least stay afloat until a rescue ship, which remained tantalisingly on the horizon for the duration of the disaster, arrived to pick up those not in lifeboats. (The captain of that ship was asleep throughout. The Titanic’s distress flares were considered by look-outs to be celebratory fireworks.)

Many stayed aboard the Titanic because it felt much safer than going into a tiny lifeboat. Titanic staff later told the inquest how difficult it had been to fill the lifeboats for this very reason. Passengers reasoned that they were better off being on a huge ship that had been called ‘Unsinkable’ than getting into a shaky little wooden thing called a ‘Collapsible.’

It was the Titanic’s rapid descent in her final 15 minutes that caught so many passengers off-guard. Its slow listing had not even been noticeable to some. It had created false security.

Once the water had broken into enough watertight compartments, it sent the ship’s microcosmic world into pandemonium. Furniture and plates that had been slowly creeping and sliding were now being sent from one side of the room to the other. Those who had dressed in their best were clinging to the bar.

It was too late to do anything. The last lifeboats had gone. The stern continued to rise dramatically. Even the captain was now shouting that it was

‘Every man for himself!’

1500 panic-driven passengers began forcing their way onto the crammed deck. Somewhere amongst the pushing and the screaming sat Isidor and Ida. Their devotion to one another may have given the impression that they were a couple of young lovers from Dawson’s Creek, the reality, God bless them, was that they were in their mid-60s. You would not have fancied their chances.

Ida Straus’ body was never recovered from the water. She is still out at sea. Isidor was found and subsequently buried in New York State. His wife’s defiant cry of ‘Where you go, I go’ met a merciless objector in the Atlantic Ocean. Their bodies are now eternally apart.