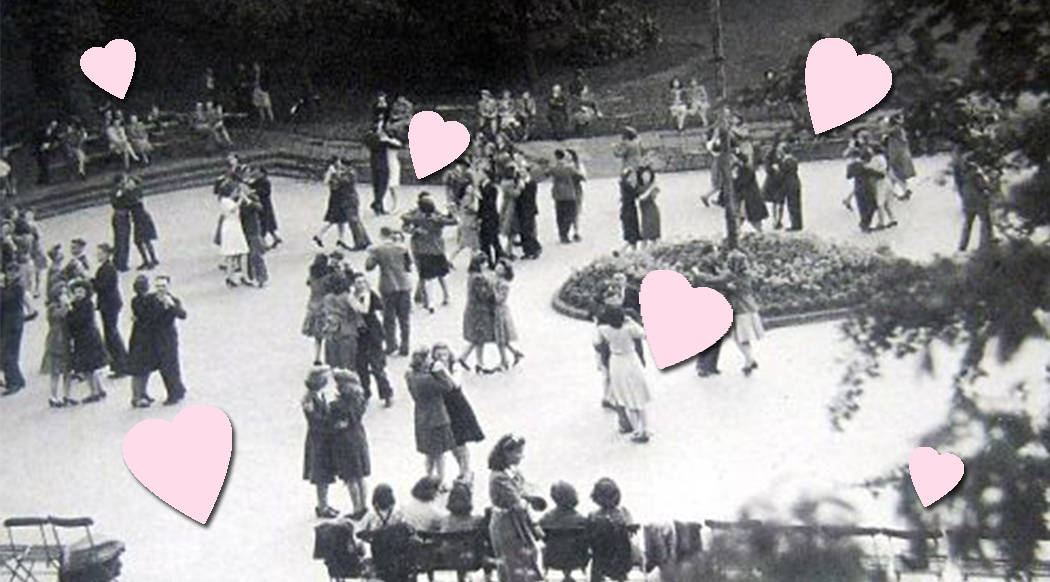 As some of you may have noticed, it was Valentine’s Day a few days ago. With its heart-shaped chocolate boxes and love bugs, it seems to have the ol’ Marmite effect on people: you either love it or you hate it! So, as Cupid puts down his arrow for another year and the roses start to wilt, it is the perfect time to turn to a little known courting ritual from years gone by: The Monkey Parade.

Monkey Parades can be traced back to around 1870 and were essentially an opportunity for young people to get together in the hope of meeting someone who ‘ticked all the boxes’. Every Sunday evening, many streets around the country were taken over as scores of boys and girls descended hoping to find their Romeo or Juliet.

The cities of Salford and Manchester were particular Monkey Parade hot spots, with lovelorn youngsters crowding around Oxford Road, Market Street and Stretford Road. Interestingly, the Monkey Parades tended to be more prominent in working-class areas of cities and youngsters were inclined to stick to their own districts. However, the parades did not go unnoticed by disapproving critics. They were often disliked and criticised by middle-class onlookers, who argued against the parades’ rowdy and sexualised nature. Interestingly, it was the young girls’ behaviour that was more often the victim of this moral onslaught. What with their silk stockings and red lipstick, many critics believed the young girls were in danger of becoming ‘Americanised’!

A Monkey Parade in Birmingham.

These critical onlookers were also concerned about the parades’ purpose. Indeed, for a lot of people the main point of the Monkey Parades were to find someone to ‘click’ or pair off with. Charles Russell, a contemporary of the Monkey Parades, gives us a fascinating insight into the operations of a parade:

‘The boys exchange rough salutations with the girls, who seem in no way less vigorous than the boys themselves, and whose chief desire, one would think, was to pluck from the lads’ button-holes, the flowers which many of them wear’.

Whilst many of the girls were as ‘vigorous’ in their search for a partner as the boys, the Monkey Parades were underlined by clearly defined gender etiquette. Like the unspoken rules of the dance hall, boys were expected to approach girls, who would often stop to look in a shop window to attract a partner. However, there were some who were less romantically inclined and saw the Monkey Parades simply as a chance to hang out with friends. Many revelers would spend their time dancing, playing hopscotch and going somewhere for tea or soft drinks.

As the Monkey Parades were for some an opportunity to find a partner, they were also an opportunity to parade ones style. A Mr. Lomas who took part in the Monkey Parades as a young man noted that ‘lads without the best clothes’ were often left of out the fun. Evidently, it was not just the girls who wanted to spend their allowance or wages on the latest fashions! Any boy or girl who didn’t have something new or stylish enough to wear would stay at home rather than be seen wearing something old or passé.

The Monkey Parades remained an important part of working-class youth culture throughout the interwar period and show the continued importance of street-based leisure throughout the 20th century. However, after the Second World War, more and more young people started to spend less of their time pursuing these traditional leisure activities and more time in places like the local cinema, milk bar or music venue. The Monkey Parades, it would seem, were ousted by modernity, but still remain a fascinating insight into the youth culture of the 19th and 20th centuries.