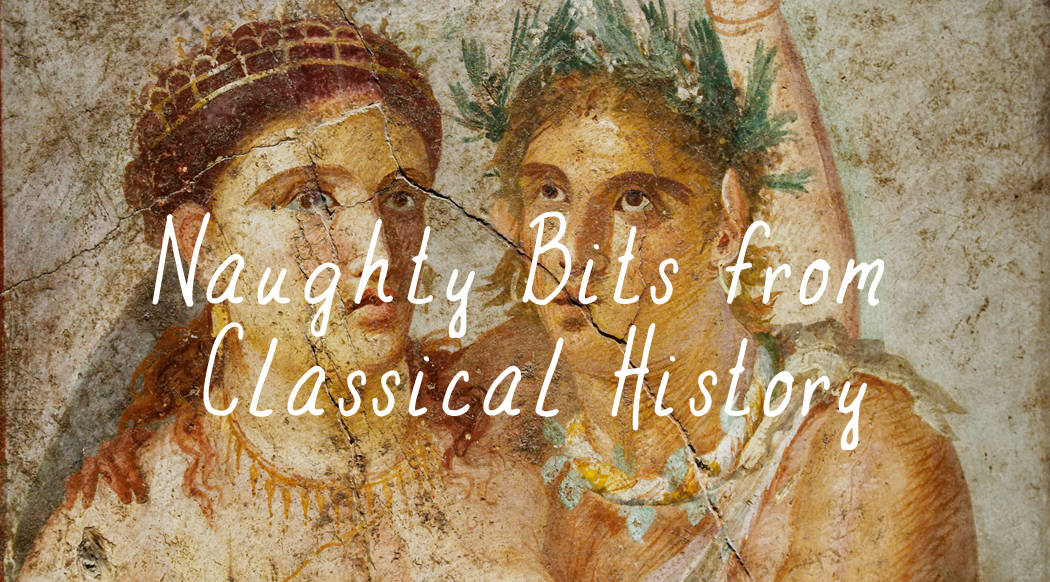 Sex was obviously not invented by classical writers but they were the first to document it in graphic detail. However perverse the practice the Ancient Greek and Romans almost always tried it first, and as such, it is no coincidence that many modern words connected with sex are Greek in origin.

In Athens adultery was considered less of a sin if it was committed with a prostitute rather than with another citizen’s wife. Foreign slaves, both male and female, were brought in from across the empire and prices were fixed helpfully low so that anyone could afford them. An added bonus was that the brothels paid taxes, which was good for the city coffers, too.

At one such brothel archaeologists have uncovered a pair of sandals with ‘Follow Me’ embossed on the soles, to leave an enticing imprint on the ground.

Hippocrates is referred to as the father of Western medicine and doctors today still take the Hippocratic Oath. However, in the beginning of the 4th Century BC Hippocrates got a few things seriously wrong. For starters, and very much in every man’s favour, he thought that women’s pleasure during sex only peaked when a man ejaculated. He also believed that a male child would be conceived if a man reached orgasm first, whilst if the woman climaxed before the man the baby would unfortunately be a girl.

In their frustration it is unsurprising that some Greek wives turned to each other. The Greeks called lesbians tribas, derived from the verb ‘to rub’. However, it was only in the 19th Century that the word lesbian evolved from Lesbos, the island home of the Greek poet Sappho, who famously wrote poems about woman in the 6th Century BC.

Ancient Greek attitudes towards women changed over time and started to reflect romantic love between men and women. There was also a greater appreciation for the female form in art, with a particular preference for callipygian woman, or those with a beautiful buttocks. Very much like women today they would sometimes pad their posterior to appear shapelier.

There’s an excellent chance the following story was exaggerated to shock, but Herodotus, author of the Histories in the 5th Century BC, commented on the Egyptian practice of keeping the bodies of beautiful women for a few days after death, until they began to decay. This was to discourage necrophilia, which was apparently not uncommon amongst embalmers at the time…

6. Grin and Bear It Ladies

Lucretius, a Roman poet and philosopher of the 1st Century BC, wrote in his epic On the Nature of the Universe that the best position for conception was to approach a woman from behind with ‘her loins uplifted high’. He asserted that it was completely unnecessary for the wife to move at all; indeed he believed that movement interfered with conception and that it was to prevent conception that prostitutes writhed about. Besides, enjoyment wasn’t regarded as part of the package for married women.

Tacitus, Seutonius and Pliny the Elder, along with other eminent writers, all recounted tales of the Empress Valeria Messalina, wife of the Emperor Claudius, who ran a brothel, where she worked as a prostitute under a false name. There she organised orgies for other wealthy Roman women, competing in all-night sex competitions with other prostitutes, which she usually won with up to twenty-five different partners. It was claimed that she used sex to increase her own power and to control politicians. Messalina also manipulated Claudius into agreeing to the exile or executive of anyone she considered a threat to her position. Naturally, Claudius later had her executed.

Julius Caesar; soldier, statesman, author, leader of Rome and conqueror of Britain and Gaul. He is regarded as one of the greatest military commanders of all time, but that doesn’t mean he was not without his insecurities. The great Caesar was very sensitive about his receding hairline and would compensate by wearing a laurel wreath whenever possible as a useful disguise. He also regularly shaved his beard and plucked and other undesirable body hair.

It was also not uncommon in Caesar’s day for centurions to have their nipples pierced to show their virility and loyalty to Rome. As a sign of strength and solidarity with his army, Caesar’s nipples were likewise pierced.

To read more titillating tales from the Classical period all the way to present day make sure you pick up a copy of Karen Dolby’s ‘History’s Naughty Bits’.