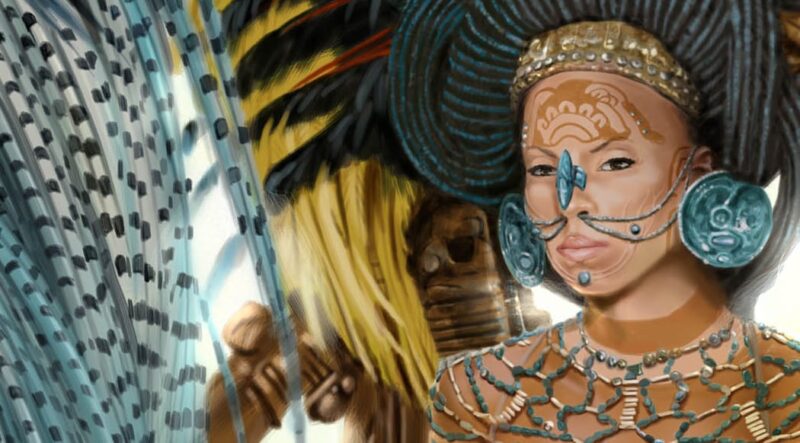 When most people think about history, they tend to immediately think of the great ancient civilizations of the Mediterranean and Near East or even of later happenings in Europe like the Renaissance.

That’s great! Those are all fun and exciting (and some of my favorite people/places) but let’s not forget about some of the great cultures of the Americas! Come with me now, across the pond or just south of the border (depending on where you are), and let’s take a look at the amazing and enigmatic Maya!

In short, the Maya had everything going on and were very, very good at what they did. They took great pride in recording all the important events in their history and from their excellent written accounts, we have learned about several incredible queens who ruled during the Classic period (c. 250AD-900AD) who would have given any of the kings of Egypt, Greece or Rome a run for their money! These ladies were military masterminds, political powerhouses and several of them earned the title of Kaloomte’, a word whose meaning is still unclear but from what we know was the highest title any Maya could earn and was usually reserved for men and/or great warriors.

We’re still learning about these queens but here’s what we know about some of these incredible women:

The first recorded female ruler in Maya history, Lady Yohl Ik’nal was descended from the founders of the Palenque dynasty in what is now southern Mexico. Although not much is known about how she ascended to the throne, it is known that she assumed power within a year of the death of Kan B’alam I, who was most likely her father and had no male heirs. She was the first of a select few female rulers who bore full royal titles and her grandson, K’inich Janaab’ Pakal, also known as Pakal the Great, was perhaps the greatest king in Maya history.

Lady Six Sky ruled the Maya city of Naranjo from 682-741AD and was the daughter of the king of the powerful kingdom of Dos Pilas. She established a new dynasty at Naranjo and commissioned several monuments detailing her observance of important rituals and even trampling captives in the guise of a warrior-king after Naranjo conquered several cities in the surrounding area. She played an important role in the tumultuous politics of the time and by the time her son succeeded her as king, Naranjo was established as a major power in the Maya empire.

Last but certainly not least, there is Lady K’abel. She had been known to archaeologists since the 1960s from portraits and inscriptions commemorating her reign, but her tomb had never been found. In October 2012, Lady K’abel’s tomb was finally discovered at El Perú, the modern name of the royal city of Waka’, now in Guatemala. Lady K’abel ruled with her husband, K’inich Bahlam II, for about 20 years and as Kaloomte’, was the military governor of the Wak kingdom and actually ranked higher than her husband, the king!