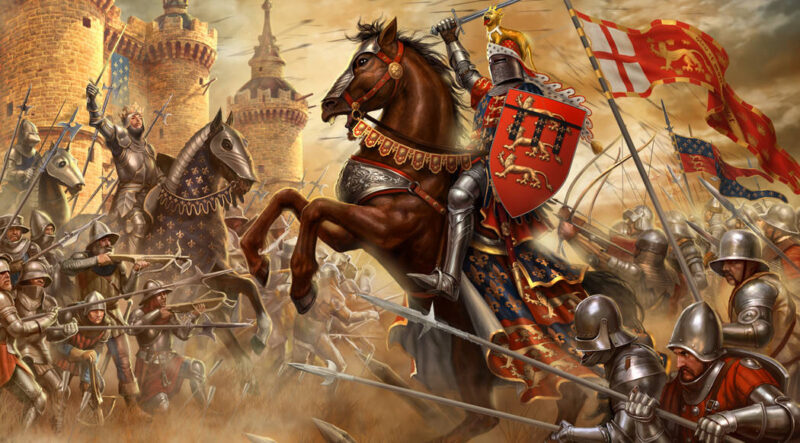 The Battle of Crécy is well known from the English point of view. Edward III’s force destroyed the largest and best-equipped army in Europe, that of King Philip VI of France, with extraordinarily few losses on his part. However, the list of those lost on the French side is long and illustrious.

The most exalted name on that list is that of a king, Blind King John of Bohemia. What was the king of Bohemia doing at Crécy, an affair between the French king Philip and a recalcitrant vassal, Edward of England?

John of Bohemia was born in 1296 into the Luxembourg dynasty and became Count of Luxembourg in 1310. John was married to Eliška of the ruling Přemyslid dynasty of Bohemia and when her father died without a male heir John inherited the kingdom on his death and was crowned in 1311.  He had close bonds with France and even sent his son to be raised at the Parisian court rather than in his own native Prague.

When Philip called on his friend from Luxembourg to join him against Edward of England, John was in Trier with his son Charles who had just been elected King of Germany. He met Philip at Paris on the 13th August and rode north in the pursuit of Edward towards the coast.  The two Bohemians were at Abbeville with Philip when Edward was trapped between the sea and the Somme and Charles would have seen Edward escape across the river to safety.

The only tale that is widely known about any Bohemian involvement in the battle of Crécy is the story of how John had his knights tie their horses to his in a long string and ride forwards towards the English because no Bohemian, even one who was blind, could be said to have run from a fight.  The Czech sources infer that only two knights were tethered to John, English suggest far more.  We can securely say that some would keep him going in the right direction, but how many we’ll never know.

The timing of the charge is not recorded definitively and two of the primary sources contradict each other.  Froissart, an English source, suggests the charge came in the thick of the fighting, but a Czech chronicler, Beneš Krabice z Weitmile records that he charged after the French had fled.  Froissart obtained his information from the English court, Weitmile from the Czech court, possibly even from John’s son Charles directly.  So who to believe?  Would Froissart have wanted John’s death to appear to be anything other than in the heat of battle and avoid the charge of having cut down a blind man?  Weitmile was reporting what his patron told him, but would Charles have preferred his father to have died in battle, or in a heroic last stand?  And would John, who guarded his royal prerogative jealously, have deliberately ridden to certain death?

The concentration of dead and dying horses on the ground, brought down by arrows and the pits dug into the ground, could not have been too great to prevent such a gallant charge from reaching the English vanguard.  Once close to the centre of the fighting, around the Prince of Wales, John swung his sword around so violently and with such little direction that his own knights were as much at risk of being hit as the English.  And so John died at the battle of Crécy.

In 1990 an examination of John’s skeleton revealed a stab injury to his eye socket. A weapon with a triangular cross section had been pushed right into his skull.  Another stab injury was found to his left shoulder blade, penetrating into his chest and probably hitting vital organs leading to a swift, if not immediate death.  The most macabre discovery was that his right hand had been severed by three blows with a blade, presumably to make theft of his rings and other personal items easier.  Looting from bodies did not stop at kings, it seems.

And so a great English myth was born – that it was John’s feathers that the Prince of Wales procured for his emblem ‘for peace’.