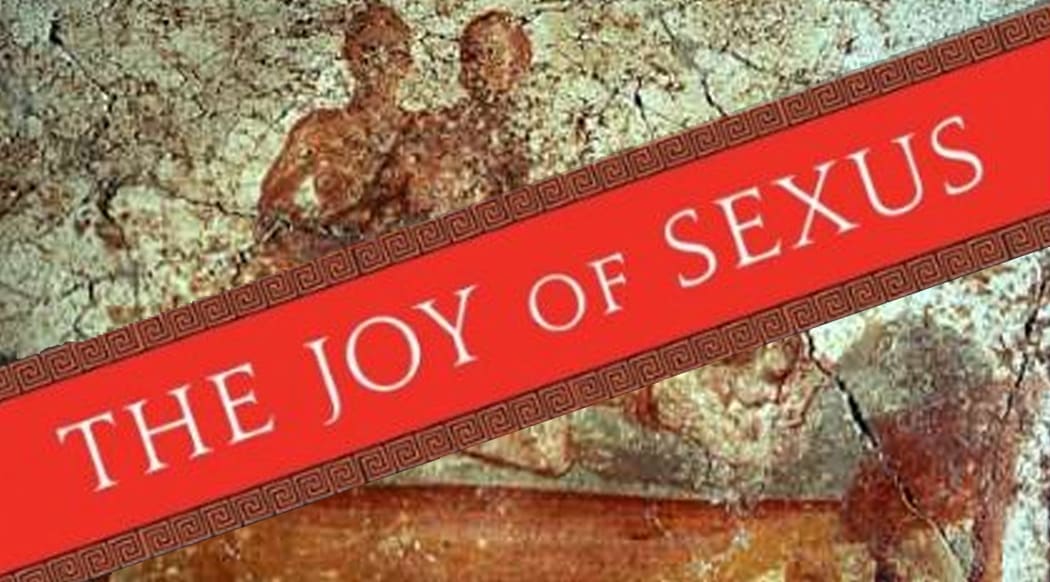 In tribute to the self described historical detective, Vicki Leon, here are ten ways the ancient Greeks flaunted their sexuality (taken from her new release ‘The Joy of Sexus: Lust, Love & Longing in the Ancient World’). Now I don’t want you to think we are lowering the tone here, because as Leon quite rightly puts it ‘…ancient history isn’t smut – it’s educational’ – and you may just learn a thing or two:

Despite not being a handsome chap, Socrates was loved by all. Ahead of his time, Socrates welcomed women, gays, slaves and sex workers into his lively intellectual circle, making him a hit with both genders, as well as different classes. As liberal as Socrates tried to make his world, he was ironically sentenced to death for “corrupting” an Athenian youth. But in true form, and in his last moment on earth, he sipped the hemlock poison, got an erection and made some gag about his ‘rooster’.

2. Make An Effort on Valentines Day

Before stuffed bears and pink candy hearts, it is most likely Valentines Day started its life as a pagan fertility bash called Lupercalia. The ancient Romans had no interest in sweet talking their loved ones; instead the men got together, sacrificed a dog and a goat, feasted and drank far too much wine. As these things usually go, the men got naked, wrapped themselves in strips of goatskin and made whips which they would lash onto the bottoms of females as they made their way around the city, bellowing naughty songs.

Never ones to suppress their sexuality, the Theban Greeks made a cultural breakthrough by combining their two favourite male activities, sex and fighting. In around 375 B.C. Thebes put together a fighting force of 300 men, chosen from its population of committed male couples. They called this elite army of lovers “the Sacred Band.” For decades, these macho men found harmony between love and killing Spartans, until an even more testosterone fuelled army led by King Philip of Macedon slaughtered every last one. Unfortunately for Philip, Karma came back to haunt him and soon after he was assassinated by a man thought to be his disgruntled lover.

Greek male’s adored big booty’s; they used the phrase ‘callipygian’, which translates as “with beautiful buttocks” to describe sizeable posteriors. In Sicily, men even went so far as to give ample bottoms their own cult, and commissioned a temple to the ‘Fair-buttocked Aphrodite’ in Syracuse. As Leon quite rightly says, ‘how delightful to have lived in a place where hindquarters basked in admiration’. A golden era when no one needed to ask “does my butt look big in these pants?”

6. Rise to The Occasion With “The Deadly Carrot”

Even ‘raging bulls of desire’ need help from time to time.  Greeks and Romans took lotions and potions to get themselves ready for the big event, such as applying ‘the deadly carrot’ to the groin area, and a Honey/Pepper/Spanish fly mixture which would truly get them all fired up.

7. Don’t Do It With Your Neighbours Wife

This is very important. In Athens and Rome B.C, female adulterers could legally be killed if found cheating. Males got off a little easier, but were publicly humiliated by the cuckolded husband, who could choose to sodomize the adulterer in front of a viewing audience.

This is not a modern phenomenon. In the first century B.C,  Servillia (at age 50), with four children and two marriages under her belt, had a famous love affair with Julius Ceasar (36 at the time). Despite both being married, they remained lovers for two decades. The reckless Servillia once sent a naughty note to Ceasar while he was in the Senate. The note was read aloud and Senator Cato (Servillia’s half bother), who was in the mist of arguing with Ceasar, finally knew exactly what his political opponent was doing with his sister! Things didn’t get easier for Servillia, when in 44 B.C her son Marcus Brutus murdered Ceasar, and Servillia lost the true love of her life.

9. Purchase a Budget Sex-Toy From Your Baker