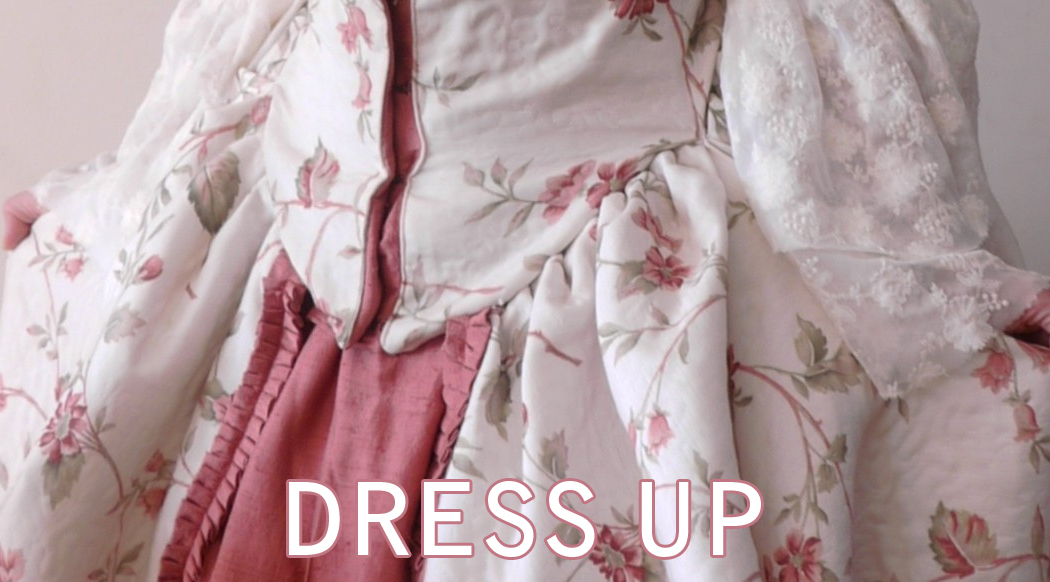 How did the lady of fashion 200 years ago answer the call of nature during long and riveting church sermons? And what was the date of the last guillotining in France? Quirky facts are a side-line of the historical research I do for my Georgian and Regency novels, and these two questions are yet to be answered correctly by anyone amongst the audiences who attend my “History through Costume Talks”.

I’d always thought it a shame to let entertaining historical gems like this go to waste… just as it seemed a waste to pass up the beautiful russet silk curtains I found a year ago in an op-shop (that’s Australian for charity shop!) for only $1.99. However, it was the convergence of these seemingly unrelated finds and facts that led to me stumbling upon a new platform from which to promote my historical fiction – as well as adding to my income stream!

A Bargain Sparks an Ambitious Project

Many years ago I’d studied costume design at the London School of Fashion. The serendipitous discovery of the russet silk curtains fired up my dormant enthusiasm for costuming since not only was the colour fashionable during the Georgian period, but the ten metres of beautiful quality fabric gave me license to embark upon an ambitious project at very little cost.

Immediately I sought out the Janet Arnold pattern book (click here) I’d been given for my eighteenth birthday, on the eve of my departure to the UK.

At first the project of making a 1780s polonaise was just for the fun of it. I envisaged the beautiful anti-heroine spy from my Georgian/Regency espionage romance The Reluctant Bride wearing it when she flees the September Massacres (the wave of mob violence which overtook Paris in 1792, during the Revolution) with her infant child.

However, I soon realised I couldn’t actually wear the gown unless I had the proper underpinnings. I needed 1780s stays (the precursor of the corset), to create the barrel-shaped torso and to push up the breasts, referred to at the time as ‘rising moons’. I also needed panniers and a ‘bum-roll’ to push the skirt out at the sides and back to create the right silhouette.  As I researched the layers required by the lady of fashion I gained a better understanding of the mind-set of the day.

Without further ado, here’s how the Georgian lady would go about dressing!

First she’d put on her chemise (which was cut with no wastage from good quality, hardwearing linen). The chemise, or shift, was worn against the skin and would be frequently laundered in an age when bathing was infrequent and the garment would absorb the body’s natural oils.

From an authentic pattern of 1780 I made half boned stays or a ‘pair of bodies’ as they were sometimes referred to. Working women often wore leather stays until they disintegrated but there are some beautiful extant luxury examples.

By the time I’d finished the panniers, I’d hit upon the idea of staging a costume display accompanied by a talk. Calling it ‘History through Costume – From Georgian splendour to Regency Simplicity’, I shopped it around and was delighted by how many libraries and community groups booked me for an hour-long talk with questions on the social and political events of the period 1750-1820. This was the impetus for finishing the costume and selecting the information I’d relate.

Panniers and the ‘bum-roll’ achieved the fashionable silhouette. Ladies’ drawers made their appearance in 1806 but only ‘fast’ women wore them, and sanitary devices were not commercially available until the 1870s. Women simply bled into their undergarments.

While to us a petticoat is an undergarment, during the Georgian period the petticoat referred to the actual skirt.  The fabric was pleated onto ties that went first around the front, and then around the back and it was quite versatile as it allowed for expanding girths. A pair of separately constructed pockets would have been tied around the waist first, enabling the wearer to place her hands through the side slits of the voluminous skirts, into the large pockets. The slim, high-waisted silhouette of Regency fashion put an end to pockets and heralded the introduction of the reticule or ‘ridicule’ as it was also known.

Finally the gown would complete the ensemble. The cosmetics, adornments and high hairstyles of the times – ranging in height from 1 to 1 ½ times the length of the face – are a tale for another time; though I will mention that while trying to authenticate the powdered look during one race against time to get to a show I found myself about to spray a can of white enamel paint over my elaborate hairstyle instead of coloured hair spray.

Finding the right shoes was a mission. I’d been going to make a pair until another op-shop hunt yielded a pair of gems. As an aside, ladies would put on their shoes and stockings before being laced into their stays. Believe me, it’s incredibly difficult to bend down and put them on afterwards – just as it is driving for an hour on the freeway with lots of twists and bends when you’re confined by a 1780s polonaise which allows little shoulder movement. (I had to strip down to my chemise in order to drive home after my first talk having made the mistake of going in costume since I wasn’t’ sure I’d find someone at the library who could lace me up.)

And, There You Have It!

So, there’s a glimpse into the dressing routine of a Georgian lady. I’m always finding new facts to include in my talks, which some schools are now interested in, and which have been aired on radio.

Oh yes, and if you were wondering how the lady of 200 years ago answered the call of nature during long and riveting church sermons, and you can’t get to one of my shows, the answer is that she might well have used a bourdeloue, an elegant vessel made of porcelain or pewter and shaped like a gravy boat! And France kept its guillotine well sharpened until September 1977 when convicted murderer and rapist Hamida Djandoubi became its last victim.

Have you made your own historical dress? Or accessories?