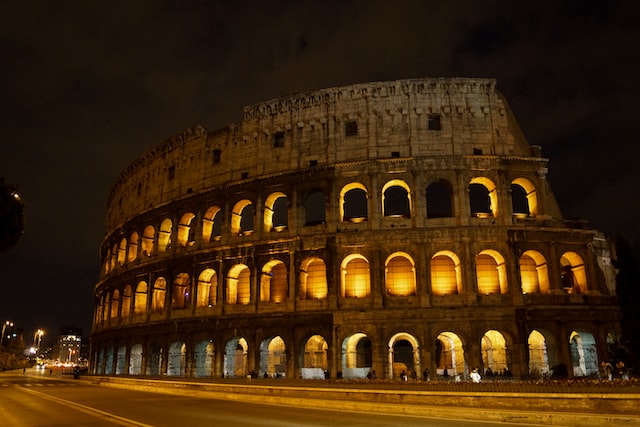 The Colosseum, also known as the Flavian Amphitheatre, is a large elliptical amphitheater located in the center of Rome, Italy. It is considered one of the greatest engineering feats of ancient times and is one of Rome’s most famous landmarks. The Colosseum is a symbol of Imperial Rome and is considered one of the greatest examples of Roman architecture and engineering.

The history of the Colosseum

The architecture of the Colosseum

The architecture of the Colosseum is a testament to the engineering and construction skills of the ancient Romans. The structure is made mostly of travertine limestone and tuff, with a concrete core. The Colosseum is an elliptical shape, measuring 188 meters by 156 meters, and stands at a height of approximately 48 meters.

The Colosseum has four levels, each with 80 arches. The arches were used to support the upper levels and provide a means of access to the different levels of seating. The arches are decorated with Corinthian capitals, which are highly detailed and ornate. The walls of the Colosseum are adorned with statues and other decorative elements, many of which were taken from other structures and repurposed for use in the Colosseum.

The top level of the Colosseum has a wooden floor, which was used to hold the velaria, a type of canvas awning that was used to protect the audience from the sun and rain. The velaria was operated by sailors, using a system of ropes and pulleys.

One of the most impressive aspects of the Colosseum’s architecture is the hypogeum, a series of underground tunnels and chambers. These were used to hold animals and gladiators before they were brought into the arena. The hypogeum was also used to control the flow of people in and out of the Colosseum, and to store equipment used in the various events.

Overall, the Colosseum’s architecture is a testament to the Roman Empire’s power and influence, as well as to the engineering and construction skills of the ancient Romans. Its architectural elements, such as arches, statues, and the hypogeum, are still used as inspiration and reference in modern times.

Here are some tips to help you make the most of your visit to the Colosseum:

The Colosseum is one of the most iconic and recognizable landmarks in the world, and it continues to be a source of fascination and inspiration for people of all ages. Despite its age and the wear and tear of centuries, the Colosseum remains an impressive architectural and engineering feat and a testament to the Roman Empire’s power and influence. It’s an important part of the world’s heritage and a must-visit destination for anyone interested in Roman history and architecture.