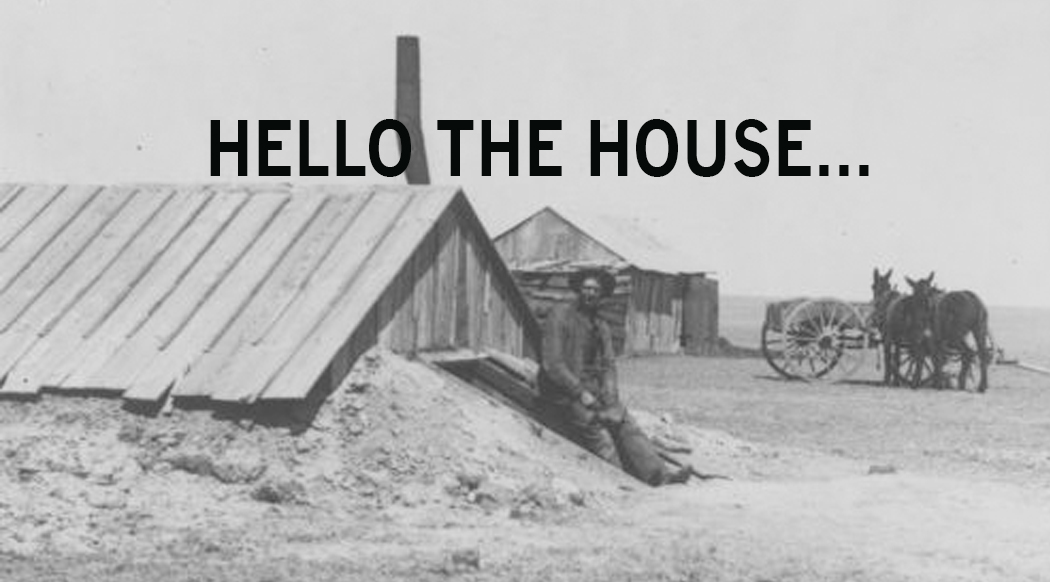 Approaching a homestead in Wyoming in the 1880s, you’d most likely holler, ‘Hello, the House!’ if you valued your life. With many west-bound pioneers of the mid 19th century settled on land which may once have been the home of native peoples, and thus a cause of strife, and with dissension between large ranches and small homesteads, a quaint desire to avoid being shot on sight would encourage you to identify yourself thus.

How did I find this out? Not from books or the internet, but from a wrangler on a ranch in Wyoming last August. A rugged, good-looking man he was, tanned from days on the range, but I was above noticing any of that: I was there for a greater purpose – to learn more about the life of second generation homesteaders in Wyoming Territory, 1887, the setting for A Bargain Struck. NB. Wyoming was only a Territory then – it didn’t become the 44th State of the Union till 1890.

Back in England, I’d found out masses about the Wild West and the dangers and hardships facing the pioneers who crossed Wyoming in covered wagons, following one of several Trails, but little about the nitty gritty of rural life for their successors.

The early pioneers were drawn by The Homestead Act, 1862, which granted 160 acres of undeveloped federal land west of the Mississippi River to each settler who staked a claim, paid a modest fee, and lived on the land for five years, building a home, making improvements and farming the land. They could then own the land outright – ie. prove-up the claim.

But I was writing about second generation homesteaders. I wanted my family to do more than struggle to survive in harsh conditions – I wanted to show them falling in love and having time do something about it. And there I hit a brick wall: I couldn’t discover how far mechanisation had reached homesteads in the late 1880s, and the small settlements that had sprung up to service them.

My solution? To go to Wyoming and stay on a ranch which dated from before 1890. Doing this, I fleshed out the lives of the second generation of settlers. I discovered, for example, that small homesteads might have a rudimentary form of running water in the kitchen. On my ranch, in addition to the main well, a 28 foot deep, stone-lined well had been sunk next to the kitchen wall. A pipe attached to a pump next to the kitchen sink ran down to the well. Bingo! Running water.

Call me trivial, but I was curious about the sanitary arrangements. I knew there’d be an outhouse, but did it have a can or what inside? No book answered this, but the wrangler did. A hole in the ground was filled when full and the outhouse moved to a different place.

From inside the homestead to outside. Homesteaders used horses to get about their ranch, so I emulated them, vaulting into the saddle and riding as they might have ridden.

That’s right; I’m not sitting side-saddle, skirts and petticoats tucked under me, as had been the custom of women in the mid 1800s; rather, I’m wearing trousers and sitting astride my bucking bronco. Yes, bucking bronco. Minutes before the photo was taken, the horse had been rearing and snorting, trying to unseat me. It had been all I could do to hang on. Honestly.

Sitting astride was a trend of the late 1880s, a museum curator told me. It came about as a result of relaxation in the restrictive nature of women’s clothing. The reason why this happening is interesting. Basically, Esther Morris, the first female justice of the peace in the country (1870), wanted Wyoming – today the second least densely populated State in the US – to become a State. A certain number of votes were required. The small population meant that women’s votes were needed so she rather bribed women into voting by encouraging a more comfortable style of clothing.

But women didn’t have the vote as early as 1890, I hear you exclaim!

My research done and A Bargain Struck now published, would I go to Wyoming again? You bet I would – like a shot!

Liz went halfway around the world to research for her book. What crazy things have you done in the name of research? Tell us in the comments box below!